Powerday has retained the recycling performance standard, PAS 402: 2013 for the fifth year running.

PAS 402 and the corresponding Green Compass scheme certification was established for waste management companies to provide a standard for performance reporting.  It was developed by Construction Excellence in Wales (CEW) whose efforts to minimise waste across the country were being held back by the lack of accurate and reliable reporting.

The PAS 402 standard is helping construction companies to increase their recycling and reuse performance and reduce waste costs through increased visibility and understanding of what is happening to their waste.

Paul Jennings, Director at Green Compass commented, ‘We are delighted that Powerday successfully completed their annual inspection for the fifth consecutive year. Powerday was the first English company to attain Green Compass Certification back in 2016. As the pathfinder company in England, Powerday has given the Green Compass scheme a profile which has helped us continually increase membership in England and particularly in the South East, where more and more companies are coming on board. The benefits of operating to PAS 402: 2013 are clearly obvious to Powerday and we wish them every success for the coming year.’ 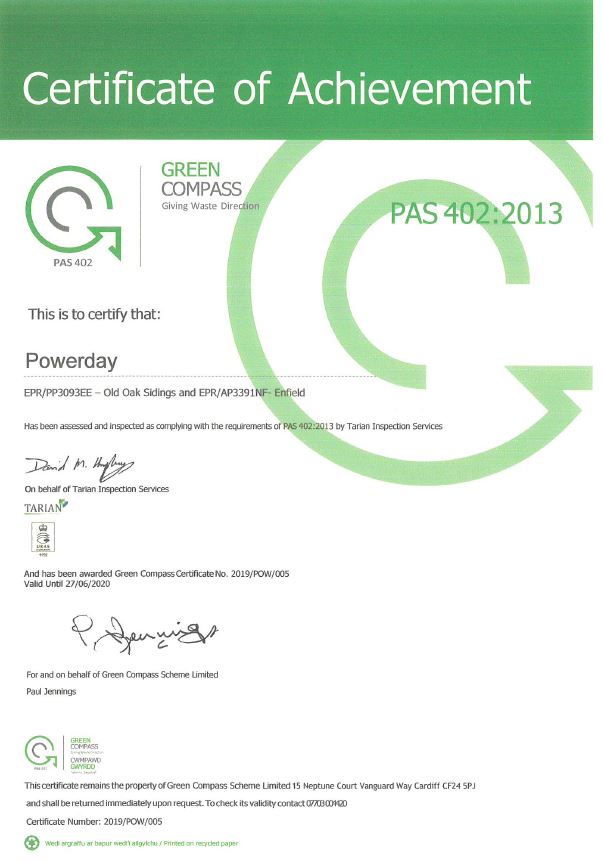