Powerday highlighted the need for greater understanding of the risks on London’s roads at an Exchanging Places event last week.

At the event held at the Guildhall and arranged by the City Of London Police, Powerday used one of the company’s new fleet of skip lorries to demonstrate to cyclists the potential heightened risks when riding with HGVs on London roads.

The ‘Exchanging Places’ scheme introduced as part of the CLOCS programme is seen as a key way of demonstrating to London’s cyclists the areas where they could be vulnerable when seen from the cab of a lorry and for drivers to hear directly from cyclists the dangers of cycling in London.

The aim is to promote safe road use and particularly to those road users that are the most vulnerable. The City of London Police can issue a fixed penalty notice of £60 for offences including jumping red lights, cycling on the pavement and cycling inconsiderately however cyclists are now offered a free place to attend an Exchanging Places event which will result in the offence being quashed.

Bill Cox, Transport Manger, Powerday said: “The Exchanging Places programme is a great way of helping cyclists and lorry drivers find out about blind spots on vehicles and how to share the roads safely with other road users. I hope that by engaging fully in the programme, London’s roads become a safer place for all road users”. 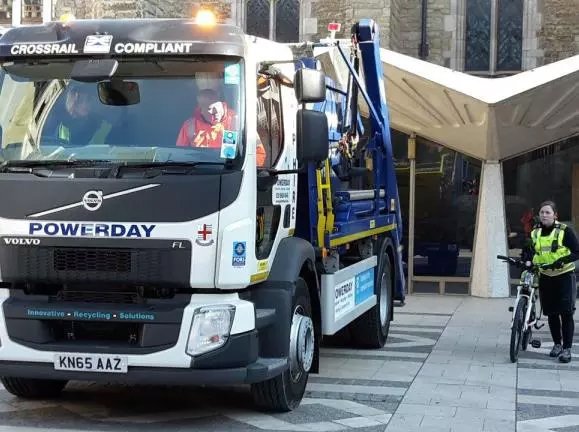