Powerday’s joint funding with London ABA is helping to deliver some great work in South East London with the Double Jab boxing club.Double Jab in New Cross works with young people as young as five by offering them boxing and general fitness training. Head Coach and Vice President Patrick Harris’s family have been involved with boxing in the South London community for four generations, he is supported by Son Michael Harris, and Cousin Jim Addis as Assistant Coaches.

New members have joined the club through the London ABA programme supported by Powerday and Sport England. Powerday’s Sales and Marketing Director Simon Little went along to a recent awards ceremony to present the new boxers with certificates of achievement.

Simon Little Says: ”the work that the London ABA do to reach out to young people throughout London is a real credit to them and all involved, the programme delivered here at The Double Jab club is an amazing example of this. I’ve witnessed some really impressive coaching here today and I know the coaches are totally committed to help the young boxers fulfil their potential no matter what level that takes them to, it’s an absolute pleasure to be involved.” 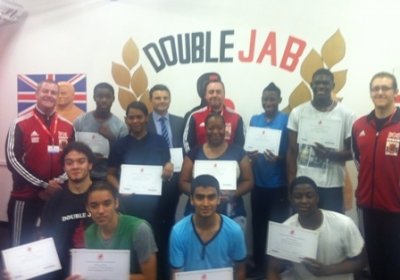