Sir Steve Bullock, the Mayor of Lewisham, said: “I am delighted to be supporting local amateur boxing clubs, the London ABA and their volunteers with the important work they carry out in Lewisham. I am only too aware that amateur boxing clubs play an important, often unsung, role in our community. The funds provided by the council will help local boxing clubs to expand their out-reach programmes increasing the number of young people the programme can help.”

Keith Walters, Hon Secretary, London ABA, remarked: “These funds from Lewisham Council will greatly assist Marvels Lane, Double Jab and the London ABA with the highly successful, Powerday financed programme London ABA, started over a year ago, whereby boxing clubs are supported to open up their facilities and amateur boxing training format to engage disaffected youth. Amateur boxing continues to innovate and build on both its Olympic success and its social role in society, creating a true legacy for both elite athletes and the communities where amateur clubs are based”

Powerday’s four year sponsorship deal with the London ABA began in November 2011 with the aim of creating a positive legacy for the London 2012 Olympics. A programme was agreed to expose new participants to boxing through taster sessions in order to support development of the sport across London and increase participation.

Find out more about Powerday’s work with the London ABA. 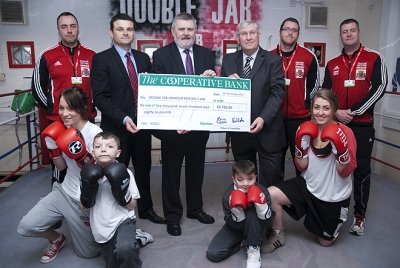