The Dale Youth Amateur Boxing Club reopened its doors last week after a £250,000 refurbishment, thanks to the London Amateur Boxing Association (ABA) Powerday Development Programme, in partnership with the Royal Borough of Kensington and Chelsea.

The legendary club has moved into a new purpose built space with new equipment and changing rooms, supporting the excellent work of the inspirational figures of Mick Delaney and his trainers and team have put in and their achievements over decades. Dale Youth Boxing Club is and has been an iconic London boxing club, a major factor in UK Boxing, and intrinsic part of the national boxing set up. The club has been a Great British success story for more than 85 years in which time it has produced an Olympic Champion, a World Champion, European, British and Commonwealth Champions including George Groves and James DeGale.

Commenting Mick Delaney, Dale Youth ABC Head Coach said: “Over the past 40+ years, we have trained all age groups and have produced more than 100 National Champions, no wonder The Dale is often referred to as, ‘The Factory of Champions’. Being presented with this state of the art gym will enable us to expand our opening hours, increase our membership and do what we do best, produce national champions, be a focus for pride in the local community and turn out generations of good citizens. A very big thank you to the London ABA, Powerday and the council for putting together this gym, a gym The Dale can be really proud of.”

The formal opening was led by Graham Gater with speeches by Keith Walters and an emotional address by George Groves who paid tribute to the people and the club that have inspired him . In his speech Keith Walters OBE, London ABA Hon Sec, President of England Boxing said: “Dale Youth ABC is a model community sports club driven by committed and resourceful volunteers, who have been and are again greatly supported by The London Borough of Kensington & Chelsea, for which I and the London ABA are most grateful. Securing the future of Dale Youth is a proud day for all who have worked so hard to achieve this splendid outcome, again, thank you all.”

Also speaking to the gathered guests Cllr Nick Paget Brown, Leader of the Royal Borough of Kensington and Chelsea, said: “The Dale Youth Amateur Boxing Club has tremendous pedigree when it comes to producing champions. However, there is much more to what it does than just producing skilled boxers. It is open to people of all abilities and even those who don’t want to box but are keen to work out in the surroundings of a boxing gym. I am sure that with these fantastic new facilities the Dale will go from strength to strength.”

Mick Crossan, Chairman, Powerday who attended the event with his son Edward said: “I’m delighted that the Powerday Development programme has been able to support this initiative for the Club, the benefits it provides to local young people will be felt throughout the community for generations. These new facilities will enable the club to continue its fantastic work, playing a pivotal role in the local community and producing boxing champions of the future” 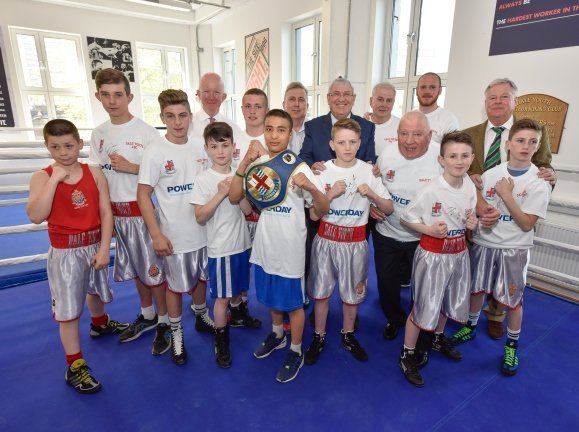