A brand new group of 25 amateur London cyclists today launch their bid to ride 500km in 4 days, and raise £40,000 for charities across the Capital.

The London Green Cycling Club, which has already received the backing of London Mayor Boris Johnson, will be taking on a dramatic and challenging route including the largest continuous gradient in England as they tackle the Yorkshire stages of the Tour de France at the start of their York to London challenge on Thursday 30th July. The riders will finish by taking on the Prudential Ride London 160 km cyclosportive through London and the Surrey hills on 2nd August. The riders’ combined distance will be the equivalent to riding from London to Mumbai.

Mayor of London, Boris Johnson, said: “The London Green Cycling Club has set quite a challenge. Having ridden in the Prudential Ride London event a couple of years ago, I know how much of a challenge riding 100 miles is. So cycling 200 miles in the three preceding days as well is pretty heroic. I urge you to support them in any way you can as they are raising money for nearly 20 charities big and small.”

Tonight the group of environmental professionals who live or work in London will meet with sponsors at the Rapha Cycle Club in central London as they gear up for their task. The climb to the summit of Cragg Vale, one of the most renowned cycling climbs in the country, has an average gradient of 7% over 4 kilometres. They will also tackle Holme Moss which peaks at 524 metres.

The real challenge though is to raise £40,000 for a series of social and environmental causes hand-picked by each of the riders, ranging from charities helping people with mental health issues such as Wandsworth & Westminster Mind and the As You are Centre through to charities working to protect the capital’s wildlife such as London Wildlife Trust.

The chair of the London Green Cycling Club, Wayne Hubbard said: “We have been overwhelmed by the support so far for the ride. The response from businesses has been incredible and I would urge other environment businesses in London and beyond to get behind our efforts”.

This evening will be the first opportunity for many of the riders to meet and compare training notes. They will be joined by London Irish, Ireland and British Lions rugby international Tom Court, will be at hand to offer cyclists insight into training and preparing for big sporting occasions.

Participating riders are drawn from the Mayor of London’s office; senior policy makers from the Greater London Authority; local councillors; local borough environmental service providers; as well as representatives from national governmental and non-governmental organisations, technology companies and consultancies – all with a shared passion for improving London as a city to live and work in.

As the ride’s primary sponsor, Powerday is covering the cost of the ride. The company has also provided the kit for the challenge. Riders have also been backed by environmental services and technology companies Glendale Services and Webaspx.

Mick Crossan Chairman of Powerday said: “Powerday has always placed the environment and maintaining strong links to our local communities at the heart of our business and promoting sport participation is central to that. We are extremely proud to sponsor the London Green Cycling Club’s epic 500km charity bike ride. With so many riders raising money for environmental and local community groups this fits perfectly with our own ethos. We want to wish all the riders the very best on their journey”. 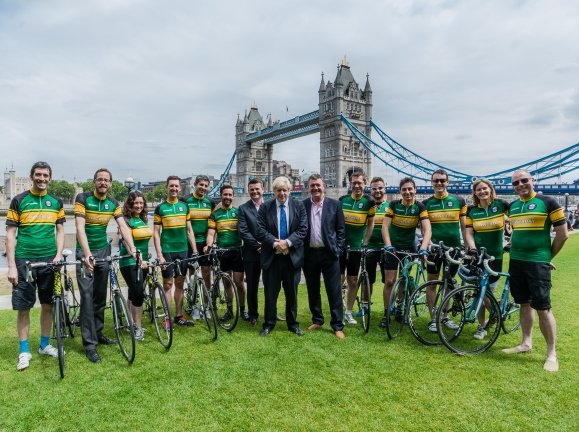